or: “Trying my best to find an early creepypasta that I can actually stand to think about for more than 15 seconds”

I guess I’ll have to face the truth: in middle school, I was an edgy little git. There was nothing I loved more than watching or reading horror, especially creepypastas. When I wasn’t freaking out about my low B in algebra or about my perennial acne, I could usually be found reading something spooky. I would stay up till some ungodly hour every night indulging my craving for horror (scary tooth?) and end up being scared so badly I could hardly fall asleep. I’d then wake up, take a two-minute shower - the process of which confounds me to this day - and roll up to school with three hours of sleep and absolutely no life in my eyes.

Now that I’ve mellowed out and can go to bed at a reasonable time, I still enjoy horror as much as I did. You can usually find a video from NaturesTemper or one of many horror channels in my YouTube suggestions, and I visit both Nosleep and the godforsaken Creepypasta Wiki on occasion just to traipse through their hallowed halls. The fact that I own mostly black clothing, contrary to popular opinion, has nothing to do with this; I just like black. I often find myself reading spooky fanfiction for Steven Universe, as well. If I had to recommend any, those would be Black Pearl and Together, both of which are narrated by Princely on YouTube. Good stuff.

Getting back on topic, since Halloween is a day away(!), I took one of my sabbaticals to the Creepypasta Wiki to read some of the classics. As I was perusing, it occurred to me: “Hey! Tier lists are popular, and bandwagoning is fun! Why don’t I try one of those?” I found a premade template on some tier list-making site and gave my awful opinion on each pasta. For reference, an S ranking means a pasta that I enjoy, a C ranking means that I had some sort of vague recollection of the pasta but didn’t have a strong opinion, and F means I wouldn’t touch it with a ten-foot pole. Without further ado, please allow me to introduce the Absolute Definitive Completely Objective Classic Creepypasta Tier List! 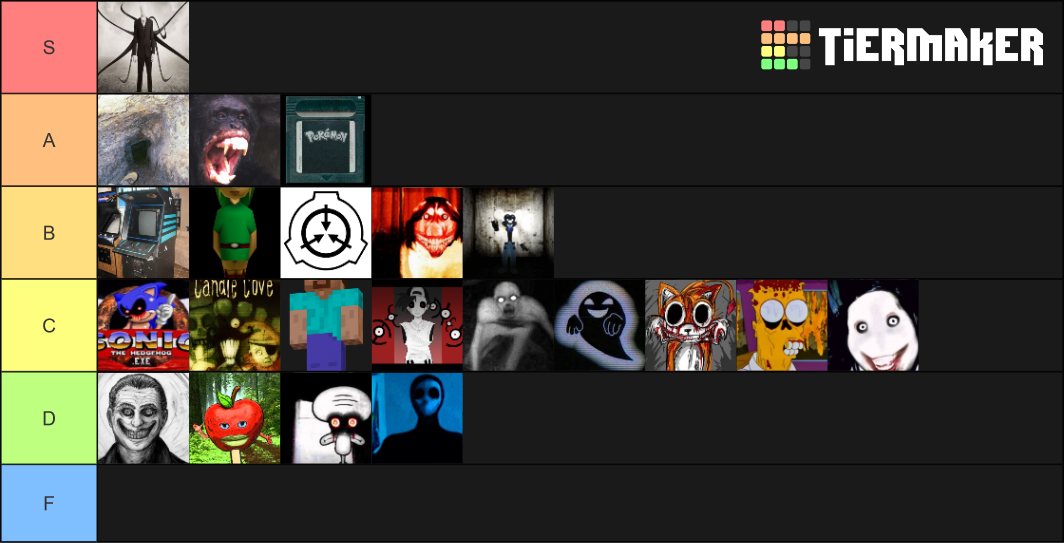 The definitive assortment of the creepy and the crappy. Take notes.

Yes. Yes yes yes yes yes. This is what a creepypasta should be. I’ve always had an affinity for anything Slenderman, and reading it again brought back some of those old feelings. You’ll notice that I’ve included the three major Slenderman webseries in this ranking. I’ve included relevant media created around the time of a few pastas that adds to the overall experience. I don’t think I need to say anything about the Big Three, however; they could easily boost Slenderman to an S+ tier if such a tier existed. I’d justify their addition by saying that any pasta that can inspire art of this quality deserves a high spot on this list.

Another great pasta, but not on the level of Slenderman or with as vociferous a following. Ted the Caver is believably written and incredibly long, with supplementary pictures to boot. I will admit that I had to skim through for my purposes. Besides, I remembered it well enough that all I needed was a little refresher. If you have the time, Ted the Caver is a must-read.

Pokemon Black mainly snagged this spot because of the romhack(s?) inspired by it. I was actually quite surprised that the author decided to include some philosophical ideas in this pasta about the mortality and the inevitability of death. Using Ghost as a regular Pokemon is pretty cool too.

Polybius has always been an urban legend, but it’s nice to have a pasta that kind of chronicles all the myths. I used to be really scared of Polybius in middle school. I remember actively refusing to watch any videos or listen to any recorded readings of it for fear of being infected with… Polybiusitis? I may never know.

I never read (or watched) much of BEN Drowned back in the day, but I do have vague memories of clips from playthroughs. I think I was too scared. I can sympathize with little, depressed Squirbo. Statues can be pretty scary.

The SCP Foundation is one of the few pastas that I think about frequently. I’ll often find myself hitting the Random Page button on the SCP Wiki and wondering why it doesn’t work after a few presses. Series I, however, is just… eh. Sure, 173 and the like are pretty spooky when you read them for the first time, but with time and the advent of much better and more creative SCPs in subsequent Series, these guys feel a little neglected. Except for 682. Screw 682.

Another one I used to be really afraid of, and one I was acutely aware of before middle school (along with Slenderman, the Pokemon ones, BEN Drowned, and a couple others). I don’t recall ever reading it, but I do remember seeing pictures floating around in various corners of the Internet and being generally familiar with the idea of Smile Dog infecting you. Wait, am I spreading it through the picture on the list? Well, sorry, folks.

I used to really like this one, actually. I think I’ve just grown less attached with time. I distinctly remember Five Nights at Treasure Island, the FNaF-esque game inspired by it. I kept meaning to play it, but I was too much of a wuss to ever even come close to it.

Like Pokemon Black, Sonic.exe snagged this spot because of the original fangame. The game itself is interesting, but the pasta is really nothing special. I understand that it was pretty cool back in the day, but with the oversaturation of pastas about creepy games and lost episodes after Sonic.exe, it just got swept up into the hate train.

As much of a classic as this is, I really don’t have much to say about it. It’s a pretty good pasta.

Ah, Herobrine! Likely the reason why I was so strangely petrified of Minecraft when I first started playing. I remember the first time I really played, I loaded into a creative superflat desert, frantically placed a few cakes, then closed the game. I was an odd duck. Still am, really. Anyway, while I was genuinely scared of Steve with no eyes, the original pasta is… lackluster, to say the least. Herobrine is mainly here because of both the impact it had on me and the hubbub it caused in the Minecraft community. Off-topic, but do you remember those other Herobrine-like creatures, like Entity 303 and Null? Screw ‘em. They don’t hold a candle to Heroic Brining.

I consider Lost Silver to be Black’s little brother. While both pastas are nice and simple for the most part, I think Lost Silver tries a little too hard. The fangame is pretty good.

The Rake is a solid monster, but his pasta is kind of underwhelming. I do appreciate how it’s written as a series of diaries and testimonies from different time periods, but for the most part they’re either too repetitive or too verbose, the last one being the worst offender. Also, the Rake always seems to be playing second fiddle to Slenderman or some other monster whenever he appears, and I’m kind of sad he hasn’t gotten much standalone recognition.

If Lost Silver is the little brother, then Lavender Town Syndrome is in the cradle. It’s a short pasta with not much substance. Its main crime is length, quite honestly. If it included accounts of affected children or was just a little longer in general, it would be higher on this list.

The primary offense of the pastas from here on down is either that they’re just not memorable or memorable for the wrong reasons, and Tails Doll falls squarely into the former. I used to like the character of Tails Doll quite a bit (I remember browsing Tails Doll fanart as a wee babe), but the pasta itself is just strange. If you do this specific thing in Sonic R, Tails Doll kills you, and he’s trapped in the game because some guy at Sega is a Shinto priest… or something like that.

Dead Bart is another one that falls between the cracks. It’s just your generic lost episode pasta, but about The Simpsons.

Ugh. Oh, Jeff the Killer. I waffled between the bottom of C and the top of D for this one, but then I realized I woudn’t want Jeff to have the honor of being at the top of anything. First off, the pasta is very poorly written. The little boy being so verbose when describing Jeffrey the Murderer is especially painful. I won’t waste space on the quality of the pasta, however; Brendaniel has an excellent video on the pasta itself. The main aspect of Jimmy the Killing Boy that draws my ire is his obsessive fanbase. I don’t mean to say that other pastas don’t have obsessive fanbases (remember the Slenderman stabbings?), but the fanbase of Geoffrey the Boy Who Kills Things is infamous for its rainbow OCs who are sO cRaZy AnD iNsAnE. I really don’t want to keep talking about Georgie the Male Youth Who Ends The Lives Of Sentient Beings; I could probably do a whole post about it.

The Smiling Man is just… bad. He just sort of stumbles down the street and smiles. Again, this pasta just needs to be longer.

If Happy Appy were unironic, it would be F tier.

Eyeless Jack is part of Jeff’s clique, but even less well written. Shame on him.

Nothing. I guess I was just too sentimental. Nostalgia really has a funny way of dampening criticisms.

So, yeah. That’s it, I guess. I really thought I’d be able to come up with something clever to put here… Happy Halloween, stay safe, and don’t eat any razors.

Oh, and don’t read Jeff the Killer. You’ll be doing yourself a favor.